The learning objectives for Decentralized Network are:

This section of the doc will introduce you to some fundamental concepts in networking and distributed systems, such as network protocol and decentralization. If you already feel very comfortable with these ideas, feel free to skip it and jump directly to the “Requirements” section.

What is a network?

A network is a set of processes (usually running on multiple machines, but not always) that communicate with each other over some communication channel (LAN, WiFi, Bluetooth, etc). Networks are incredibly useful because they can leverage the power of resource-sharing.

Here are some examples of networks: fax machines (what’s a fax machine?), a city’s traffic control system, an email system, a virtual private network, a website and its visitors, the iPhones of Uber drivers and riders, and–very generally–the internet.

What is a network protocol?

The definition of a network protocol, according to Wikipedia, is this: “A system of rules that allow two or more entities of a communications system to transmit information via any kind of variation of a physical quantity.”

In layman’s term, a network protocol is just an agreement made by all the nodes in a network on how to communicate with one another. It is like a blueprint: You sent me a bunch of bytes over the network, how do I reconstruct your message and understand it?

Here are some examples of network protocols:

In this assignment, you will learn to develop your own protocol. Your protocol does not need to be as complicated as HTTP, but it needs to contain enough information to satisfy what your network tries to achieve.

For example, if I’m designing a protocol for a chat service, my protocol might look something like this:

In this protocol, the sender ID informs other nodes who is sending the message, timestamp can be used to order messages, message size helps nodes to verify that they’ve received the whole uncorrupted message, and message will contain the actual string message.

This is a minimalistic protocol that meets the requirement of the system. When designing your own protocol, think about:

What is a network topology?

Network topology is the structure, either graphically or logically, of a network. It essentially describes how nodes in a network are connected.

The simplest example of a network topology is the client-server model, where one computer (or node as often referred to in distributed systems) is a dedicated server, passively listening for incoming connections and serving requests. The rest of the network consists of clients, which actively make requests to the server and make requests.

The underlying topology of a client-server model is the star topology, where every node is connected to a central hub. Note how none of the clients are directly communicating with each other, and every message needs to go through the server.

Another network topology you sometimes see in distributed systems is the fully-connected network, where every node is connected to each other: 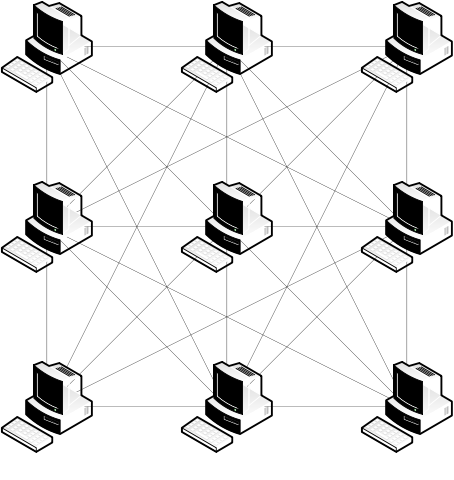 A fully-connected network is extremely resilient, since:

However, fully-connected networks do not scale very well. The number of connections in the system grows quadratically (O(n^2)) with the number of nodes, which can easily over-flood a network. So in reality, this topology is only used for small networks with a relatively small number of nodes.

Each topology has its own pros and cons. For example, a ring network performs really well under heavy network load; it can easily achieve mutual exclusion (by passing a token along the ring); and it is easy to configure. But a ring network is not fault-tolerant, and its communication delay is bottlenecked by the slowest connection between two nodes.

A decentralized system, described in one sentence, is a network in which no one node can control every other nodes.

Examples of decentralized systems include:

For this MP, your goal is to design a network protocol for a decentralized network, and implement it using any language you want.

The network topology you will implement is a hybrid between a star network and a fully-connected network:

Notice that in order for the peripheral nodes (A, B, C, D, E, F) to talk to each other, they must send their message to a router node (0, 1, 2) first, then the router node will forward the message until it reaches the destination.

You will implement such a network consisting of 9 nodes. Node A, B, C, D, E, and F are peripheral nodes that can send message to each other through routers. Node 0, 1, 2 are router nodes that only forward messages but do not create any new message.

You can test your code on localhost by using different ports. You can have the following setups:

To make sure that the correct nodes are connected to each other according to the topology, you can hardcode the IP addresses and ports of all the connections a node has in a set of configuration files.

For example, node A will have the following configuration file:

where the first line is the address and port node A itself will listen on, and the lines following are the connections to other nodes it will make.

Using the same example, node 0 will have the following configuration file:

where node 0 will listen on the address and port specified on the first line, and the other 4 lines specify connections to node A, B, 1, and 2.

This way, to run your code, you can simply open up 9 terminals and run the same program with 9 different configuration files to achieve the desired network topology!