The learning objectives for Extreme Edge Cases are:

One thing we know is that good code is generally modular - it consists of discrete “units” of functionality that are only responsible for very specific and certain behavior. In our case, working with C, these “units” are functions.

For example, the C string function strlen is solely responsible for determining the length of a string; it doesn’t do any I/O or networking, or anything else. A function that knows all and tries to do all would be bad design, and testing whether that kind of function adheres to expectations would be nontrivial.

A programmer might ask, “do my units of work behave the way I expect?” or “if my function expects a string, how does it behave when given NULL?”. These are crucial questions, since ensuring that units of code work exactly the way one would expect makes it easy to build reliable and robust software. An unreliable unit in a large system can affect the entire system significantly. Imagine if strcpy, for example, did not behave properly on all inputs; all of the higher-level units that use strcpy, and all of the units that interact with those units, would in-turn have unpredictable behavior, and so the unreliability would propagate through the whole system.

Unit testing is a ubiquitous and crucial software development method used heavily in industry. According to artofunittesting.com, “a unit test is an automated piece of code that invokes a unit of work in the system and then checks a single assumption about the behavior of that unit of work”. This sounds like testing - leave it to the QAs, right? Actually, developers, much to their chagrin, are expected to write their own unit tests.

In order to write effective unit tests, all possible cases of input to a unit (mainly functions, in C), including edge cases, should be tested. Good unit tests test (extreme) edge cases, making sure that the discrete unit of functionality performs as specified with unexpected inputs.

In this MP, your goal is to create and test the behavior of an arbitrary string manipulation function to determine if it is reliable, predictable, and correct. While writing your functions, try to write modular code, as this will make your life easier when you test it. You’ll learn how to write effective test cases - an incredibly helpful skill for the rest of the course. Finally, you’ll be able to take these skills to Facenovel for your next internship and impress your coworkers.

as your arbitrary string manipulation function.

Your manager at Facenovel, to celebrate Hump Day, has asked all of the interns to implement a brand new camelCaser to convert sentences into camelCase. To give you a chance to earn your return offer, he also assigned you to write test cases for all the other interns’ implementations of camelCaser, with the implementations hidden from you.

Let’s say I want to get a sequence of sentences in camelCase. This is the string passed into your method:

Your method should return the following:

The brackets denote that the above is an array of those strings.

Here is a formal description of how your camelCaser should behave:

Hint: ctype.h has a lot of useful functions for this.

Your implementation goes in camelCaser.c, and you may not leak any memory.

You must also implement destroy(char **result), a function that takes in the output of your camel_caser() and frees up any memory used by it. We will be calling this in our test cases and checking for memory leaks in your implementation, so remember to test this!

camel_caser() takes in a C string, which represents an arbitrary number of sentences, and returns a pointer to a NULL-terminated array of C strings where each sentence has been camelCased. It is up to you how the resulting structure is allocated, but it must be completely deallocated by your destroy() function.

For those who like pictures, here is what the return value of camelCaser looks like in memory: 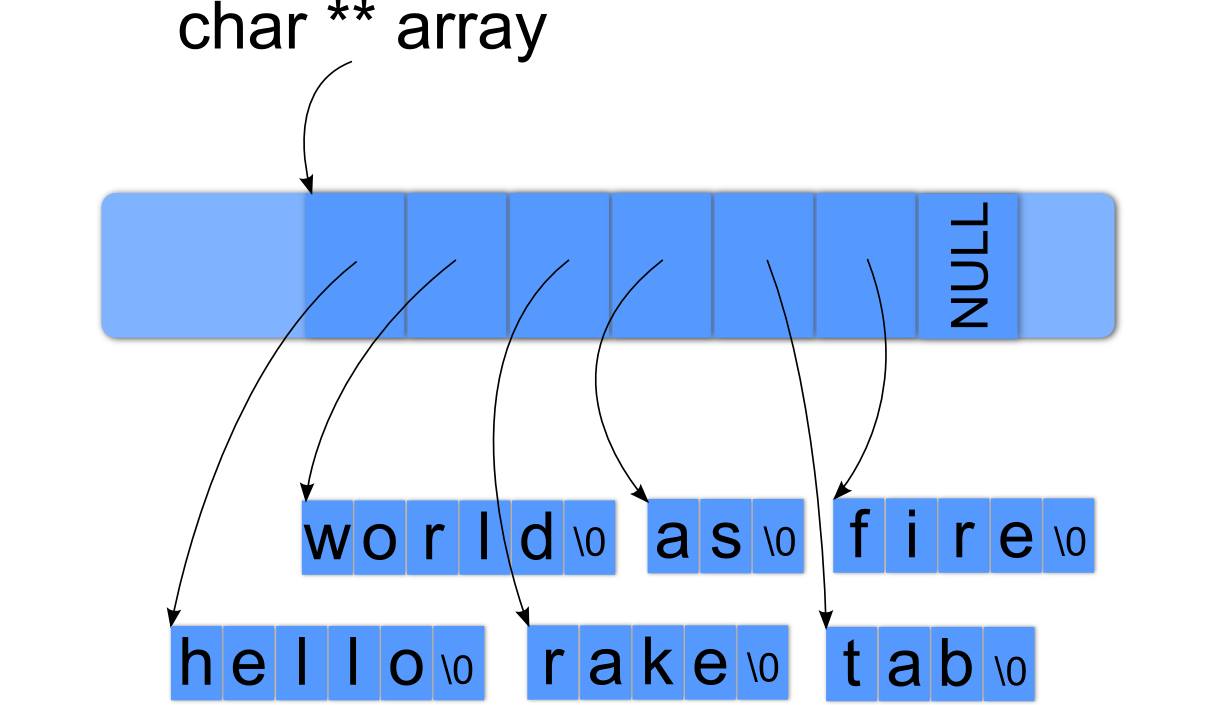 In the above picture, you can see that we have a char double pointer called ‘array’. In this scenario, the char double pointer points to the beginning of a NULL-terminated array of character pointers. Each of the character pointers in the array points to the beginning of a NUL-terminated char array that can be anywhere in memory.

These arrays are NULL-terminated because your user will need to know when these arrays end so they do not start reading garbage values. This means that array[0] will return a character pointer. Dereferencing that character pointer gets you an actual character. For demonstration purposes, here is how to grab the character “s” in “as”:

Your goal is to show that the other interns’ implementations of camelCaser - which, of course, you can’t see directly - fail on some extreme test cases, and, in the meantime, demonstrate to the head honcho at Facenovel exactly how robust your own function is.

Facenovel promises to pass in C-strings. Likewise, you promise to return a dynamically allocated NULL-terminated array of C strings that can be deallocated with your destroy() function.

Run make camelCaser to test. You will have to fill in tests in camelCaser_tests.c.

Also, it is not in the spirit of unit testing to diff the output of your implementation with the one you are testing. Therefore, you may NOT call your own camel_caser() function when implementing your test cases.

Your senior coworkers at Facenovel have taken a liking to you for your work ethic, and they decided to help you by providing you a reference implementation. You are given an interface camelCaser_ref_tests.c which allows you to access the black-box reference implementation. You are given two utility functions to help you understand what camelCase looks like.

The first function provided isprint_camelCaser(char *input). It takes a string input and prints out the transformed camelCased output onto stdout. This function is meant to be used to help you answer questions like, “What should be the result of inputting <blah> into camel_caser()?” Note that this function might behave weirdly with non-printable ASCII characters.

The second function that you can use is check_output(char *input, char **output). This function takes the input string you provided and the expected output camelCased array of strings, and compares the expected output with the reference output. This function is to be used as a sanity check, to confirm your understanding of what the camelCased output is like. This will also help you to understand how to deal with non-printable ASCII characters.

A few important things to be aware of when you use the reference implementation:

Note: The reference implementation is only available in release form. There is no debug version of the reference.

Grading is split up into two parts.

The first portion of the test cases test your implementation of camel_caser(). We pass in some input, and check that your output matches the expectations laid out in this document. Essentially, your code is put up against our unit tests, which means you can write as-good (or even better) unit tests to ensure that your camel_caser() passes ours.

For each of the camel_caser() implementations that you correctly identify - marking a good one as good, or a bad one as bad - you get a point. To prevent guessing, randomization, or marking them all the same, any incorrect identification loses you a point. However, after each autograde run, we will tell you how many good ones you correctly identified and how many bad ones you identified, so you know which unit tests may need improvement.

If your unit test segfaults or otherwise crashes, our test will interpret that as evaluating that implementation as a bad one.

You cannot assume anything about the input, other than the input string being NUL-terminated, just like all C strings.

Tips and tricks on approaching assignments #

Many assignments in this course will read your output and grade them. This means that having stray prints may cause you to randomly fail tests. Furthermore, excessive logging prints can reduce the performance of your code, which can also cause you to fail tests. Therefore, you should always check your code to make sure you don’t have random prints in your code. Instead of writing print statements and removing them repeatedly, a recommended strategy is to use the following function below to perform logging:

The DEBUG macro is enabled in the debug build by passing the flag -DDEBUG to the compiler when compiling the debug build of an assignment (please report to staff if an assignment’s debug build does not have the -g or -DDEBUG flags). The #ifdef statement is a preprocessor directive which includes a code snippet into the executable if the macro is enabled during compilation. Therefore, statements in #ifdef DEBUG blocks do not appear in release builds of assignments. This will prevent you from impacting the performance of release builds (if you need these logging prints in release builds, remove the #ifdef directive). Furthermore, this logging function prints to stderr. We typically do not check what’s in stderr, so feel free to use that output stream to dump your logging messages.

Often, you’ll see that system calls and library functions will return -1 and set errno upon execution failure. errno is a special global variable that stores the error codes for failures in function calls. Many system calls do not guarantee success and can fail at random, even malloc! Therefore, whenever you encounter bizarre failures, one thing to keep in mind is to check if a function/system call failed, and if so, determine why it failed. Attached below is a sample code snippet of reading errno using perror: