The learning objectives for Finding Filesystems are:

So you’ve been doing well at Macrohard. Your turbo malloc really impressed your boss and you also went on to work on the infamous password cracker and parmake programs. However, your bosses have been looking for a way to store data in a proprietary format so that they can easily share chunks of data without having to first compress it. They have the following requirements:

Sounds tough. That second requirement really throws a spin on things. It’s such an arbitrary requirement. Almost as if it was just thrown in as a TA’s lazy writing to motivate an MP or something. Lame!

Of course, as a student of CS341, you know exactly what they’re asking for - a loopback filesystem! After doing some research, you decide that a good filesystem to base your implementation off of is minixfs. Your friendly coworkers have already made some progress on this project and created a filesystem wrapper, fakefs, that can load a mininxfs image. It’s now your job to implement a few filesystem operations for minix.

In this MP, you will be implementing several callbacks to file system operations, namely, chmod, chown, read, and write. To do this you will be exploring how metadata is stored in the inode and how data is stored in the data blocks. You will also be exploring the idea of virtual filesystems and how they can be used to present metadata about a system.

ext2 is good filesystem, but to keep things simple, we will be using a modified version of its predecessor (the MINIX filesystem) in this MP.

The file_system struct keeps track of the metadata, the root inode (where fs->inode_root[0] is the root "/" inode), and the root of the data_blocks.

The inodes and data blocks are laid sequentially out so you can treat them like an array. Think about how you could get a pointer to the nth data_block.

The superblock stores information like the size of the filesystem, the number of inodes and data blocks, and whether those data blocks are being used. Remember from class that inodes become free when their hard link count reaches zero, but data blocks need some kind of bitmap or sentinel to indicate if they are being used. data_map is a variable-sized array that holds this information. You don’t need to worry about these abstractions, they are taken care of for you.

This is the famous inode struct that you have been learning about! Here are a breakdown of the variables:

We are using the direct and indirect members of the inode to index our data blocks, which works like so. 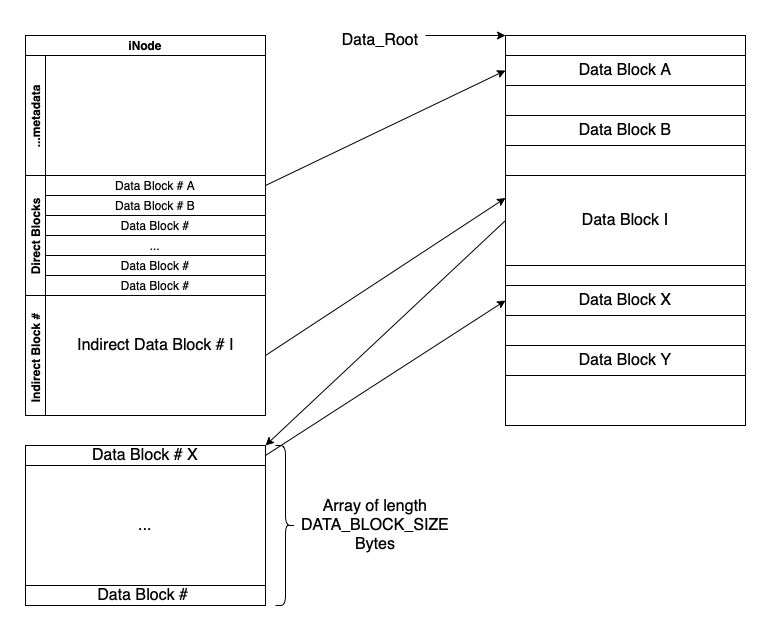 Data blocks are currently defined to be 16 kilobytes. Nothing fancy here.

You do not to modify or read any of the code in fakefs_src/.

To make this MP possible, we’ve developed our own userspace filesystem interface which we’re calling fakefs. Normally, filesystems are a piece of code which you load into your kernel and must provide a few things. It needs a constructor, destructor, callbacks for all system calls involving files and file descriptors within your filesystem. However, writing kernel code is a bit more cumbersome than writing normal code since you need additional security checks among other things, and can even lead to instability in your operating system. To avoid this, there are various ways to implment a filesystem in userspace. The most common (and preferred) method is to use a library called FUSE (Filesystems in USErspace). FUSE allows you to implement your file operations in userspace, but still interacts with the kernel to provide it’s functionality. While this allows you to mount the filesystem and use it like any other filesystem, there are a few reasons why we chose not to use it for this MP. A major reason is that if a FUSE callback crashes while it is mounted, it renders the mounted partition unusable and in some cases, you won’t be able to even unmount the partition without rebooting the machine. To prevent making this MP annoying and tedious, we’ve made our own way of implementing filesystems in userspace by hooking filesystem operations.

If you take a look at fakefs_src/fakefs.c you’ll see that we’ve overridden most of glibc’s filesystem operations. Note that this only hooks functions from code or programs that were either written in C or in something that compiles to C. Running a program written in assembly will not be affected by these hooks.

Note that not all programs will work with fakefs. At the least, we guarantee that ls, cat, mkdir, unlink and cp work. vim and neovim seem to work although you might run into some weird bugs using these programs within fakefs.

TL;DR: running a program with fakefs will replace glibc’s filesystem operations with your own functions. Make sure you use this when testing your code.

There are some functions that you are going to need to know in order to finish this MP.

This function takes a string name like /path/to/file and returns the inode corresponding to the file at the end of that path. get_inode returns NULL when the intended file does not exist or the file is invalid.

Call is_file or is_directory on an inode to tell whether it is a directory or a file. You don’t need to consider other inode types.

Call is_virtual_path on a path to see if it’s a path in the virtual component. If it is, this function will return a path relative to the virtual directory. Returns NULL otherwise.

Call minixfs_min_blockcount to ensure that an inode has a certain minimum number of data blocks directly, or indirectly, associated with it.

NUM_DIRECT_BLOCKS is the number of direct data_block nodes in a single inode. The indirect array also has this many entries (for the sake of simplicity).

You may not need to use this macro, but if you choose to, then any data_block or inode that is not currently being used will have this number.

You can find information about these in minixfs.h and minixfs_utils.h. It’s also a good idea to read through the provided functions briefly (at least the headers) to get an idea of what tools we provide you with.

You will need to implement the following 5 functions

And you will need to implement a virtual file /virtual/info. For more information about that, scroll down to the virtual filesystem section.

You can find more information about the required functions in minixfs.h. Remember to set errno on errors in your code!! We will be checking errno while grading.

Note that for all functions where you need to update times, you should use clock_gettime(CLOCK_REALTIME, variable_to_update);.

Since we’ve had many students ask about this function, this section will contain some hints.

Note that the parent directory of a path passed in will always exist when we test your code.

When you find an unused inode, you will need to use init_inode to initialize it.

make_string_from_dirent will write the contents of a minixfs_dirent to the char * you provide.

The number of bytes written by calling make_string_from_dirent will be equal to FILE_NAME_ENTRY as defined in minixfs.h

The virtual filesystem we will be baking into our mininxfs implementation will live at /virtual with respect to the root of your minix filesystem. There will be at least one file inside, info. You do not need to implement writing to /virtual/info, but do need to support read. When read from, /virtual/info will return a string with the following format:

Note that there is a new line at the end of each line above. You will need to compute the number of free and used blocks to insert into the data. Also note that you will need to support reading the virtual file from an offset, and must not copy more bytes to the user’s buffer than requested (just like a normal read).

To simplify your implementation we recommend first generating the data above as a string and then copying a certain number of bytes of the string from a desired offset to the user buffer.

Testing is ungraded, but highly recommended

You can grab the test filesystem using make testfs. Do not commit this file. If you overwrite it and want the original version just rm test.fs and do make testfs again

You will probably want to reset your test.fs file frequently while testing your write functionality.

Note: There’s a small chance that make testfs can fail - in this case rm test.fs and make testfs again.

make will generate the minixfs_test executable that you can use for testing. We strongly recommend writing your own testcases in minixfs_test.c and not just using the output of commands like ls and cat (which we describe how to test with below). This is because subtle bugs in your code can make the output look right, but have random unprintable characters as well.

Here are some sample (and not comprehensive) testcases!

You can even cat directories!

So that’s what really is going on under the hood?

You can also use the /goodies directory in minixfs_test.c. Here’s an example:

You can store anything on filesystems. See what we hid around the testfs filesystem for you…

You can also test by generating your own filesystems. Simply run ./fakefs mkfs filename to generate a filesystem with the filename filename. If you’ve implemented the write functionality, you can use commands like ./fakefs cp file1 filename/ to copy files over. programs like mkdir should work as well.