If you think your programs crashing before, wait until they crash ten times as fast - **

A thread is short for ‘thread-of-execution’. It represents the sequence of instructions that the CPU has and will execute. To remember how to return from function calls, and to store the values of automatic variables and parameters a thread uses a stack. Almost weirdly, a thread is a process, meaning that creating a thread is similar to fork, except there is no copying meaning no copy on write. What this allows is for a process to share the same address space, variables, heap, file descriptors and etc. The actual system call to create a thread is similar to fork. It’s clone. We won’t go into the specifics, but you can read the http://man7.org/linux/man-pages/man2/clone.2.html keeping in mind that it is outside the direct scope of this course. LWP or Lightweight Processes or threads are preferred to forking for a lot of scenarios because there is a lot less overhead creating them. But in some cases, notably python uses this, multiprocessing is the way to make your code faster.

Creating separate processes is useful when

On the other hand, creating threads is more useful when

In a multi-threaded program, there are multiple stacks but only one address space. The pthread library allocates some stack space and uses the clone function call to start the thread at that stack address. 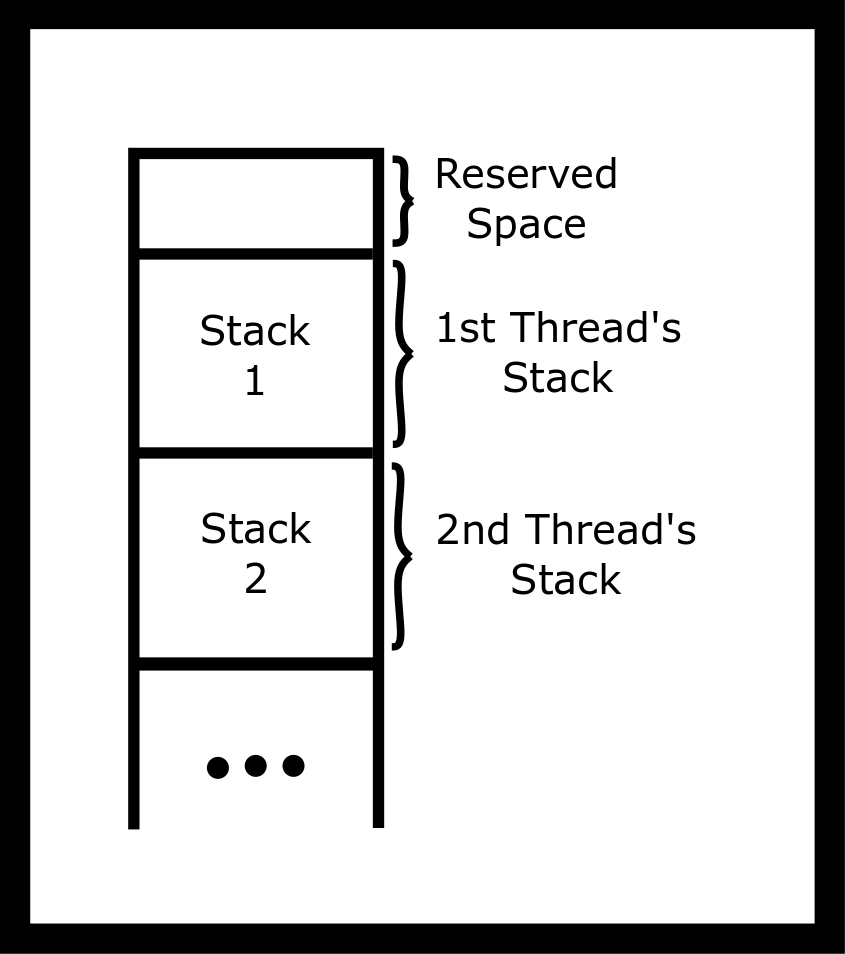 A program can have more than one thread running inside a process. The programget the first thread for free! It runs the code you write inside ‘main’. If a program need more threads, it can call pthread_create to create a new thread using the pthread library. You’ll need to pass a pointer to a function so that the thread knows where to start.

The threads all live inside the same virtual memory because they are part of the same process. Thus they can all see the heap, the global variables, and the program code. 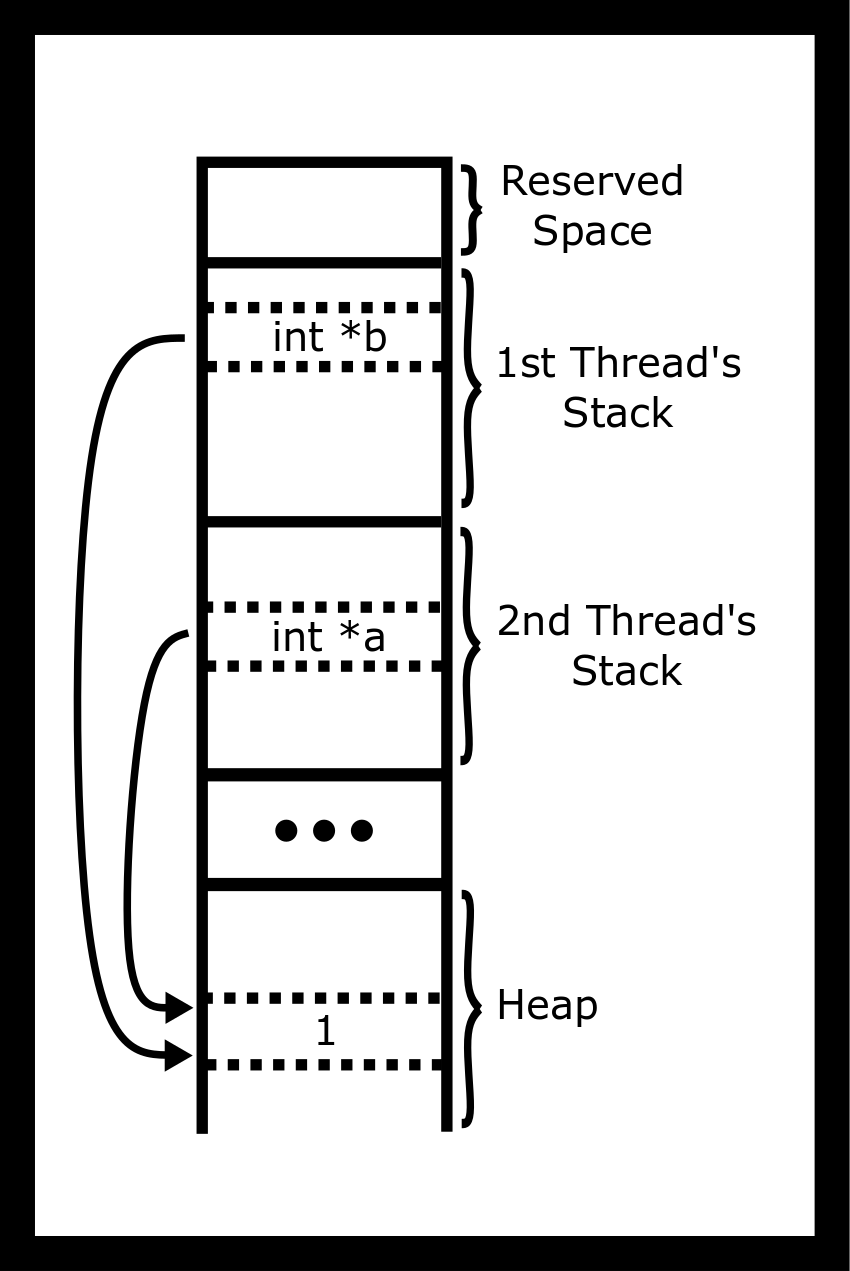 Thus, a program can have two (or more) CPUs working on your program at the same time and inside the same process. It’s up to the operating system to assign the threads to CPUs. If a program has more active threads than CPUs, the kernel will assign the thread to a CPU for a short duration or until it runs out of things to do and then will automatically switch the CPU to work on another thread. For example, one CPU might be processing the game AI while another thread is computing the graphics output.

To use pthreads, include pthread.h and compile and link with -pthread or -lpthread compiler option. This option tells the compiler that your program requires threading support. To create a thread, use the function pthread_create. This function takes four arguments:

The argument void *(*start_routine) (void *) is difficult to read! It means a pointer that takes a void * pointer and returns a void * pointer. It looks like a function declaration except that the name of the function is wrapped with (* .... )

In the above example, the result will be NULL because the busy function returned NULL. We need to pass the address-of result because pthread_join will be writing into the contents of our pointer.

In the man pages, it warns that programmers should use pthread_t as an opaque type and not look at the internals. We do ignore that often, though.

Here are some common pthread functions.

There are many ways to exit threads. Here is a non-complete list.

Race conditions are whenever the outcome of a program is determined by its sequence of events determined by the processor. This means that the execution of the code is non-deterministic. Meaning that the same program can run multiple times and depending on how the kernel schedules the threads could produce inaccurate results. The following is the canonical race condition.

Breaking down the assembly there are many different accesses of the code. We will assume that data is stored in the eax register. The code to increment is the following with no optimization (assume int_ptr contains eax).

This access pattern will cause the variable data to be 4. The problem is when the instructions are executed in parallel.

This access pattern will cause the variable data to be 2. This is undefined behavior and a race condition. What we want is one thread to access the part of the code at a time.

But when compiled with -O2, assembly output is a single instruction.

Shouldn’t that fix it? It is a single assembly instruction so no interleaving? It doesn’t fix the problems that the hardware itself may experience a race condition because we as programmers didn’t tell the hardware to check for it. The easiest way is to add the lock prefix (Guide #ref-guide2011intel, 1120).

But we don’t want to be coding in assembly! We need to come up with a software solution to this problem.

A day at the races

Here is another small race condition. The following code is supposed to start ten threads with the integers 0 through 9 inclusive. However, when run prints out 1 7 8 8 8 8 8 8 8 10! Or seldom does it print out what we expect. Can you see why?

The above code suffers from a race condition - the value of i is changing. The new threads start later in the example output the last thread starts after the loop has finished. To overcome this race-condition, we will give each thread a pointer to its own data area. For example, for each thread we may want to store the id, a starting value and an output value. We will instead treat i as a pointer and cast it by value.

Race conditions aren’t in our code. They can be in provided code Some functions like asctime, getenv, strtok, strerror not thread-safe. Let’s look at a simple function that is also not ‘thread-safe’. The result buffer could be stored in global memory. This is good in a single-threaded program. We wouldn’t want to return a pointer to an invalid address on the stack, but there’s only one result buffer in the entire memory. If two threads were to use it at the same time, one would corrupt the other.

There are ways around this like using synchronization locks, but first let’s do this by design. How would you fix the function above? You can change any of the parameters and any return types. Here is one valid solution.

Instead of making the function responsible for the memory, we made the caller responsible! A lot of programs, and hopefully your programs, have minimal communication needed. Often a malloc call is less work than locking a mutex or sending a message to another thread.

A program can fork inside a process with multiple threads! However, the child process only has a single thread, which is a clone of the thread that called fork. We can see this as a simple example, where the background threads never print out a second message in the child process.

In practice, creating threads before forking can lead to unexpected errors because (as demonstrated above) the other threads are immediately terminated when forking. Another thread might have locked a mutex like by calling malloc and never unlock it again. Advanced users may find pthread_atfork useful however we suggest a program avoid creating threads before forking unless you fully understand the limitations and difficulties of this approach.

The study of parallel algorithms has exploded over the past few years. An embarrassingly parallel problem is any problem that needs little effort to turn parallel. A lot of them have some synchronization concepts with them but not always. You already know a parallelizable algorithm, Merge Sort!

With your new understanding of threads, all you need to do is create a thread for the left half, and one for the right half. Given that your CPU has multiple real cores, you will see a speedup following https://en.wikipedia.org/wiki/Amdahl’s_law. The time complexity analysis gets interesting here as well. The parallel algorithm runs in \(O(\log^3(n))\) running time because we have the analysis assumes that we have a lot of cores.

In practice though, we typically do two changes. One, once the array gets small enough, we ditch the Parallel Merge Sort algorithm and do conventional sort that works fast on small arrays, usually cache coherency rules at this level. The other thing that we know is that CPUs don’t have infinite cores. To get around that, we typically keep a worker pool. You won’t see the speedup right away because of things like cache coherency and scheduling extra threads. Over the bigger pieces of code though, you will start to see speedups.

Another embarrassingly parallel problem is parallel map. Say we want to apply a function to an entire array, one element at a time.

Since none of the elements depend on any other element, how would you go about parallelizing this? What do you think would be the best way to split up the work between threads.

Check out thread scheduling in the appendix for more ways to schedule.

In the beginning of the chapter, we mentioned that threads are processes. What do we mean by that? You can create a thread like a process Take a look at the example code below

It seems pretty simple right? Why not use this functionality? First, there is a decent bit of boilerplate code. In addition, pthreads are part of the POSIX standard and have defined functionality. Pthreads let a program set various attributes – some that resemble the option in clone – to customize your thread. But as we mentioned earlier, with each later of abstraction for portability reasons we lose some functionality. clone can do some neat things like keeping different parts of your heap the same while creating copies of other pages. A program has finer control of scheduling because it is a process with the same mappings.

At no time in this course should you be using clone. But in the future, know that it is a perfectly viable alternative to fork. You have to be careful and research edge cases.